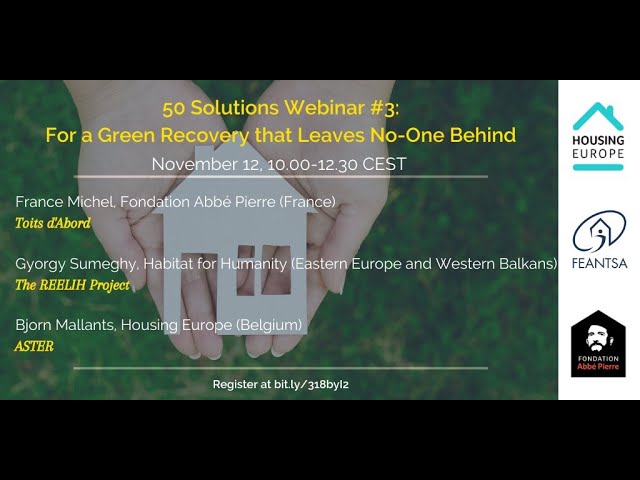 The Onslaught of Private Investors on Social Renting

The Rassemblement Bruxellois pour le droit à l'habitat (RBDH) is a local group of about fifty associations in Brussels that defend the right to housing and indeed access to affordable housing quality .

A crisis of affordable housing

Brussels suffers from a lack of social housing: in 2017, its stock amounted to 39,742 housing units, which represents only 7% of the capital housing stock. Supply is insufficient and the construction of new housing is too slow. On average, only 110 new social housing units are built per year.

More than 40,000 households are waiting for social housing and have to be housed in the private rental market. But at what cost?! In 2015, the average monthly social rent was € 320

, while the average private rent in the same year was € 709. More than double. For a person who lives on social welfare benefits with a budget of approximately 1000 €, this is an unsustainable situation.

Today, the private rental sector houses more poor households than the social housing sector. The private sector is not regulated, and since 2018, although there is an indicative list of rents, this is informative and not mandatory.There is, however, in Brussels, on a small scale, a mechanism that "socializes" private rents: social rental agencies (SRAs). These agencies manage to rental properties at prices that are on average 30% lower than market prices in a win-win partnership with property owners.

The owner that chooses a lease through a SRA accepts a reduction in rent but benefits from: a guarantee of rental income, even in case of vacancy or failure of the tenant to pay and the certainty of recovering his property in the state he gave it at the end of the contract. The effort is therefore to relativize. The properties rented under this formula are occupied by publics close to those of social housing . Some SRAs work with tenants who have specific problems: experience of homelessness, addictions, etc.

SRAs assume the rental risks thanks to support from the Government, which has been given since 1998. For politicians, it represents a welcome alternative in the context of the woeful production of public housing: nothing to build, nothing to manage, nothing to maintain. SRAs have been a success story in Brussels: in 1998, the agencies rented 450 properties. They now rent 5534 dwellings and the largest increase was registered last year with 750 additional units.

The typical profile is property owners who have inherited wealth and who are willing to sacrifice some of their profits in exchange for peace of mind. However, in recent years, other demographic groups have become interested in the sector. These are investors who buy housing and, more recently, new housing stock to then offer to SRAs. Until recently, this had never been done. They are assisted in their approach by the public authorities, which, with generous tax benefits, guarantee the profitability of the operation.

Since 1st January 2017, people who buy a new property to rent it to a SRA have a reduced VAT rate of 12% (instead of 21%) with the condition of a delegation of management for 15 years. And since 2018, all leasers who put their property in management in an SRA are exempt from property tax (about 1000 € / year for a new property, which represents about two month’s rent). (3)

This phenomenon remains for the moment marginal compared to the scale of the market for real estate in Brussels. But in the sector of SRAs, it is a striking evolution. 900 new homes are expected in the short term, including large complexes.

A trio of actors are playing their part: investors ready to finance operations, developers who build and sellers who make the connection between the two.

In Belgium, rental investment remains a safe bet, which can be expected to yield an average return of around 3% net. Thanks to public support, investors who engage with a SRA maintain this level of return. Admittedly, rents are lower than on the market, but one should bear in mind that the rental risks are nonexistent. Of course, for this to be profitable, housing should not cost too much to buy. Therefore, most of these dwellings are located in communes where the price of land remains low (working-class neighborhoods).

Two types of investors are interested in SRAs today. The first are individuals, small owners, who wish to ensure the sustainability of their capital and who, in an opportunistic logic, opt for management through SRA of one or more properties. The other are investment companies that want to combine profitability and social investment, in a logic of impact investment. In this category, one particular company stands out, Inclusio (4).

The demand exists and promoters respond to it. The social nature of the activity is secondary but is, for some, a new outlet. The expected margins are lower, but the projects are selling well and quickly, even before completion. For the promoter, these are projects without areas of uncertainty (about not being able to sell the good) and are easily financed. The housings are then sold as a whole or as several units. Sometimes the marketing is outsourced via a broker (e.g. the TREVI group) which also benefits from a quick sale.

We welcome the massive arrival of new dwellings for SRAs. There are just as many opportunities for precarious tenants. We also appreciate the mobilization of a small part of private savings (€265 billion in Belgium) for social purposes. The phenomenon, however, should be treated with more caution. We would like it more framed and less generous in the head of the government. Why?

First, because it is a market of opportunity, which means it is precarious. Nothing guarantees the sustainability of these investments. Who knows if tomorrow's investors will continue to put their money in SRAs, e.g. if there is a rise in interest rates ? The public authorities must be aware of this and allocate a proportionate % of their spending, prioritizing what is sustainable (public social housing for example). The generosity of the public authorities towards the new actors causes us concern. We fear that this will continue and lead to additional benefits, to the detriment of more sustainable policies.

Second, when the owner recovers the management of his property (after 15 years), the property returns to the private market which is unregulated and speculative. The public financial investment that motivated the promotors and ensured the profitability of the project is lost. The investor is, in turn, doubly winning: 15 years of safe and profitable investment and a high likelihood of a decent added value in the case of a resale. In order to make the intervention of the public authorities profitable and to balance the effort on both sides, we are in favor of longer periods of socialization for the property or potentially that the public authorities are awarded a percentage of the surplus value if the property is resold.

Another source of concern is the presence of influential private companies in the sector that could lead to a revision of the foundation of the policy tool. In particular, we fear a rise in rents. Some of these companies aim to both make housing "affordable" but also, in parallel, to grow investments to satisfy their shareholders. The balance between economic and social interests is fragile and can, at any moment, shift if the terms of the market change or if the companies’ ambitions require it.

The RBDH believes this could allow some private investors to impose a point of view and pressure policy makers. The RBDH is concerned by the increasing role of some private investors and the risk that some of them could ultimately decide to unlock rent in part of their "social" housing stock, to increase profit. The RBDH is concerned that such a strategy would appeal to public authorities who remain strongly attached to supporting the middle class.

(2) According to a report on Poverty in Brussels published in 2018 (Rapport bruxellois sur la pauvreté 2018 - baromètre social), 1/5 of inhabitant of Brussels aged between 18 and 64 live on social benefits (safe of unemployment wage)

(4) Limited partnership by share whose co-founders are Bank Degroof Petercam, KOIS Invest and Revive and the original shareholders are none other than the big fortunes of Belgium.